PARIS, Jul 1, 2007/ FW/ — Dick_head, F***_face, Sex_angel, Butt_boy and 12 of their friends have escaped from their virtual world to visit a Paris night club called Le Bataclan on the last day of Paris Menswear.

They have been invited there by Sex-clown, the personal self-projection of designer Walter Van Beirendonck, who created the sixteen strong, self-conscious men proudly presenting their masculinity and body diversity.

“Avatars have been fascinating to me since the mid-nineties” says Walter Van Beirendonck. “With the arrival of Second Life, avatars have finally found their own world, and the real world has become aware of their power.”

The very carnal representations of these digital beings also combined another fascination of the designer, which thus makes a strong comeback in his work: fetishism.

This theme is interpreted here in a very original manner. Van Beirendonck treats it with the colourful inspiration drawn from Sogobo rituals, which happen twice a year in Mali and are part of a traditional puppet theatre. Fantastic animal figures -which are usually the main inspiration in that tradition for brightly colourful masks and dolls- become here the symbolic representations of the most private male body parts.

Sometimes interpreted in knitwear big patterns on jumpers, these motifs were also executed with maestria in papier mache on head-dresses by one of the designer’s best friends, Stephen Jones.

The famous Mr. Pearl has also realized for this collection the clever corset worn by body_bear, aka Alex Marboni, wonderfully cinching the muscled body of the Impressive male black beauty by underlining the waistline, hips and shoulders.

Are Real Life men really going to leave the physical body behind and act as pure digital lifeform? Only the future will tell, but as Van Beirendonck says: “It could be the final process in body manipulation”. 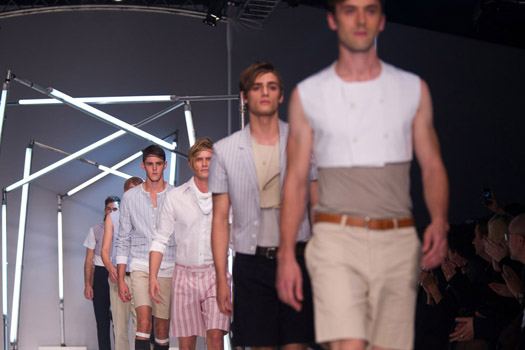 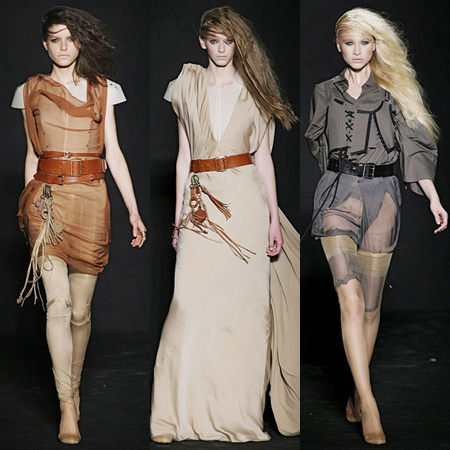