DALLAS, May 14, 2008 / FW/ — A trip down memory lane with Marsha Bentley Hale who shot these photos in September 2003 as part of her graduate studies. One of the foremost mannequin historians, Bentley Hale gave her insights both on the store window themselves and the use of mannequins in Barcelona’s Barrio Gotico.

Mannequins With Blank Canvas Look with a Dash of Wild Artistry

Down a covered passageway, I came across a store selling men’s underwear, which their male models displayed in all their glory.

There was the male mannequin I dubbed “The King and I” looking very much like Yul Brenner. His “mate” was a female with voluminous long curly hair. Their counterparts not too far away were a couple composed of a bare-midriff female and a dark haired male who appeared to be gazing at the heavens.

In contrast down another alley were the blonder than blonde “Moonlight” girls. In alleys of the old town of Barcelona, I find that the display artists work within the confines of their space, which for the most part are tiny boutiques.

It felt like bold splashes of fashion in the alleyway theatres of store display. 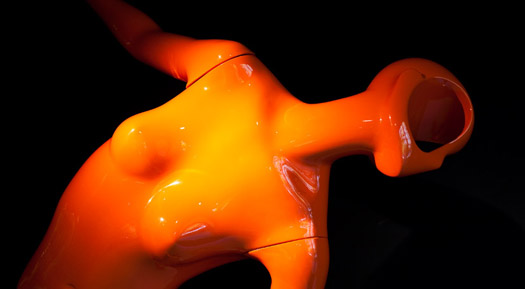