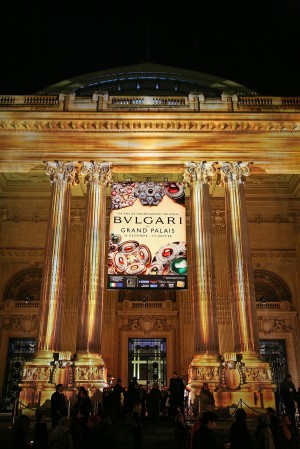 PARIS, Dec 27, 2010 / — Andy Warhol once said, “I always visit Bulgari, because it is the most important museum of contemporary art.” And he was talking about the store!

From December 10, 2010 – January 12, 2011, the whole word will understand Andy Warhol’s comment as the Italian jeweler hold a retrospective exhibition devoted to Bulgari at the Grand Palais.

Entitled “125 years of Italian Magnificence,” the exhibition will retrace the main chapters in Bulgari’s history and the evolution of the esthetic that made the brand a driving force of the “Italian school,” from the opening of the first shop on Via Sistina in 1884 through the modern day.

This fascinating saga will be illustrated by more than 600 masterpieces of jewelry, watch- and clockmaking, and the decorative arts, including some one hundred exclusive pieces that will be on public display for the first time.

Certain pieces come from the collection of the Bulgari Museum, an exceptional trove of historic treasures conserved in the company’s archives, while others are from private collections. Visitors will be able to admire three pieces owned by the Grimaldi family, including a necklace that belonged to Princess Grace.

The exhibition consists of eight sections arranged in chronological order. The visitor’s path will start with a collection of silver objects created in the late 19th century by Sotirio Bulgari, a Greek silversmith blessed with a creative mind and keen business sense. 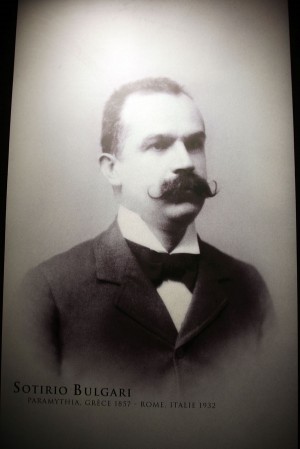 Having come to Rome to seek his fortune, in 1884 he laid the foundation of what was to become one of the world’s greatest jewelry houses. These pieces are the only remaining examples from Bulgari’s earliest days, in a style that shows classical, Ottoman and Byzantine influences.

Next, visitors will discover a space dedicated to the designs of the 1920s and 1930s. These pieces, a series of diamond jewels inspired by the art deco movement, reflect the huge success enjoyed by the house, which was then headed by the founder’s two sons, Giorgio and Costantino Bulgari.

The next room will present creations from the 1940s and 1950s, a period during which Bulgari’s designs were heavily influenced by French jewelry styles.

This will be followed by a section devoted to the 1960s, a decade marked by a radical change that would prove crucial in defining the house’s identity. It was during these years that Bulgari developed the distinctive features that would make the brand world-famous: bold, stylized forms, understated volumes and strikingly original color combinations defined an inimitable style, a genuine “Italian school” of jewelry that contrasted with the more classical French jewelry. 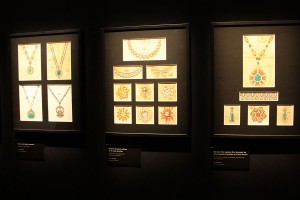 The next three rooms will house creations from the 1970s, very much influenced by pop art and praised by Andy Warhol, the 1980s, a time of daring, inventive design inspired by the Italian Renaissance, and the 1990s, characterized by unexpected combinations of materials as well as the introduction of a “ready-to-wear” concept of jewelry.

These were also the years of excess and extravagance, when Grace Jones wore multiple layers of fine jewelry necklaces as a “hat,” and when Tina Turner threatened to cancel a concert if no one could find her most precious good luck charm: a pair of Bulgari earrings.

The final section of the exhibition under the glass dome of the Grand Palais will feature an astonishing structure of mirrors fitted together to form an immense diamond. 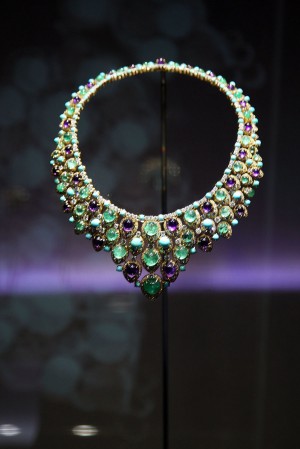 The continuity of the Bulgari style in the 2000s will be represented by a selection of pieces, including a stunning necklace adorned with a Burmese sapphire of more than 321 carats.

A separate room will be exclusively devoted to the fabulous private collection of Elizabeth Taylor, never before seen in France.

The stormy relationship between Elizabeth Taylor and Richard Burton was punctuated by a series of gifts from Bulgari, as reflected in many quotes by Richard Burton on his then-wife: “The only word she knows in Italian is ‘Bulgari’,” “I introduced Liz to beer and she introduced me to Bulgari.”

This will be an exceptional opportunity to admire some of Bulgari’s most extraordinary creations: 16 one-of-a-kind pieces of nearly inestimable value, each with its own history.

One example is the diamond brooch with a central emerald of more than 18 carats offered by Burton to Taylor as an engagement gift in 1962.

It was the only jewel the star wanted to wear on the day of her first wedding to Burton, on March 15, 1964. In addition to her jewels, the display will also include the David di Donatello trophy awarded to Miss Taylor in 1959 for her work in the film Suddenly Last Summer, directed by Joseph Mankiewicz. 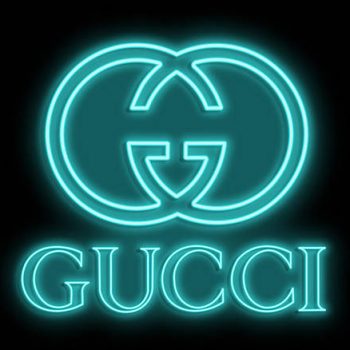