PARIS, Jan 25, 2006/ FW/ —- During a season of innovative designs at haute couture, Madonna shows up at Jean Paul Gaultier’s haute couture preview, causing a photographer’s mayhem that even the paprazzi’s will be proud of.

While the very polite and genteel haute couture crowd sat patiently for the show to start, Madonna walks out from backstage to take her appointed front row seat. Needless to say, the celebrity photographers went to action immediately as the music icon walked towards her seat.

It was the longest 10 meters in history! What would have been a walk for 2 minutes turned out to be 20, as Madonna dutifully posed for the photographers, albeit with her hawkeyed bodyguards scanning the crowd of photographers making sure that no one gets out of line.

But, they did not need to worry. After all, this is the haute couture crowd – refined and cultured; and the celebrity photographers reacted just like them. Hence, no pushing or shoving; they just wanted to do their job.

Rumors immediately flared up that Jean Paul Gaultier is once again going to make the costumes for Madonna for her upcoming world tour. The rumors are not baseless though. The French couturier dressed Madonna for her Blonde Ambition tour.

After the photos furor for Madonna died down, the show finally started. At the end, all the models came out throwing rose petals to the crowd. Jean Paul Gaultier came out and when he passed Madonna, he emptied his basket full of rose petals on her, and then gave her hugs and kisses.

So, should we say that the ‘deal’ had been sealed with a kiss? We’ll find out soon enough. 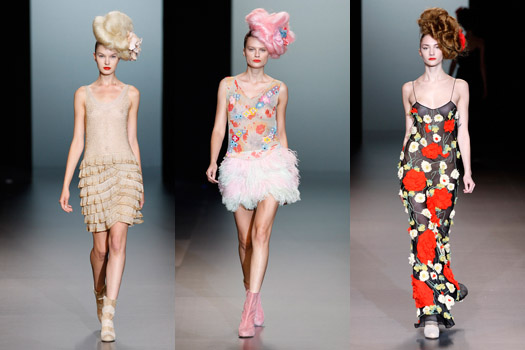