MILAN, June 25, 2008/ FW/ — For a decade now, menswear has been taking on the attributes of women’s wear with feminine colors, embellishments and details becoming a larger part of collections.

Now though, those seeds have already grown roots and the newly planted seeds hope to grow a mélange of formal and sportswear. Versace’s was not one to miss out on this new birth of style and her Spring Summer 2009 collection shows it.

With indie-pop music giving an upbeat youthful energy, Versace was looking to the future of fashion and the luxury business. With decreasing sales Versace realizes things have to change so she is going about to make those changes by reinventing the face of formalwear. Shapes while tailored also incorporate volumes and technical treatments to materials become ever more important.

Shiny, glossy and sheer all play important roles in the blend of sportswear and formal. In women’s wear all three are already a large part of the formal wardrobe while in menswear the textures are normally associated with sportswear.

Basketball shorts, tennis shirts, and jerseys were all the typical shiny menswear articles. In the last few seasons you could see the trend of glossy suits but now the unison is going even further.

For Versace she explored a range of new fabrics to give formalwear a lighter hand. Pants that look like they are made in silk are actually a techno taffeta made out of a nylon with a modified atomic structure. Stripes and check patterns that are tone-on-tone, use technology to reach a new level of luxurious patterns.

Bomber jackets are turned into tailored pieces of art, while meticulous suits are worn with bright colorful sandals. The blend of sports and formal is so complete that neither takes precedence and the outcome is something new and refreshing.

To add to the freshness of the collection are an array of vivid colors in pink, orange, lilac, mint, and sky. The natural stone, grey, black and vanilla colors are the base of the collection and where color doesn’t play an important role texture takes over.

Versace gave options for trousers by giving an array of cuts with both slim and wide leg options. Sport coats were well fitted while parka’s and trenches were light and airy.

The collection is a new type of luxury that is a big movement in men’s fashion and is taking not only advantage of technology but inspiration too. As the Versace house put it, “formal attitude, informal mindset.” 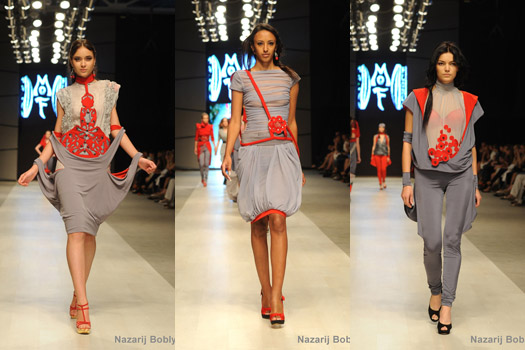