MILAN, Mar 16, 2009 / FW/ — Last March 2, it was not only his Fall 2009 collection that John Richmond unveiled on the catwalk. It was also the time and place where he launched his latest perfume, as the final model came out of the runway carrying a big factice of the bottle.

Actually, the word recession is not in John Richmond’s vocabulary nowadays. The British-born, Milan-based designer had continuously expanded his product lines, which now include eyewear, underwear and beachwear, the junior line and the footwear, the newly introduced fragrance and of course, his womenswear and menswear lines.

Speaking of womenswear, John Richmond’s Fall 2009 collection is rock & roll chic, the toughness replace with the uptown girl attitude. With models wearing their hair rolled into chignons at the back with a contrasting backcomb quiff at the front gives it a boyish effect, and thus instead of tough chick, it bordered on androgyny.

A predominantly black collection with generous splashes of gold, as seen in the quilted golden jackets and the gargantuan zipper designs on the neckline and shoulders, John Richmond was at his element. And if you’re wondering where you are going to buy these collection, there will be a hundred of RICHMOND stores t hat will be opened in the world’s main markets by 2011. 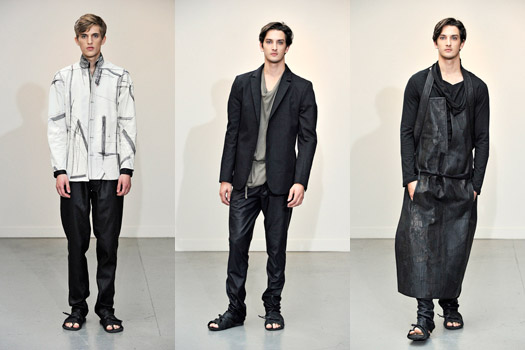