NEW YORK, Mar 4, 2009 / FW/ — Intimate. That’s an overall mood one can fall into when thinking of a presentation held for a small group of fashion’s elite last Feb 18th, 2009. The entire world is digesting this much talked about economic crisis and yet those whose world revolves around fashion must forge ahead. Presentations have been choice this season for many obvious reasons, cutting back being imperative. Limiting your collection to the most principal pieces that represent your vision for the season, and really taking into account that selecting a prominent silhouette, may fair best in this time of tighter budgets, and moreover, conscious spending.

Vivienne Tam hosted her fall 2009 collection in her new Soho boutique. The black covered glass windows with her namesake stenciled out insisted that her choice for minimalism is still quite ever present. Simplistic hair and makeup paralleled the collection. Artists used a single delicate stroke of liner on the lower rim of the lid wisped at the corners, and one thick clean stroke across the top lid. For hair, stylists opted for natural, forming a no fuss French twist, light on the product and feathery around the center of the crown. Tam, known for her deep construction, offered crisply draped silk cocktail dresses, intricately cut out necklines, digital graphic prints and loads of understated relationships between bold contrast and texture.

The palette for this collection held a striking congruency to the past two seasons. Crimson reds and deep grapes were dominant. To some this may have been safe…to others, very intuitive. When a formula proves to be profitable, and you know your consumer, cater to their demand. Tam used the same palette for Spring 09. For those who were paying attention, Tam prefaced both Spring 09 and Fall 09 back in April of 2008 when she attended the DIFFA’s Dine by Design Gala Dinner wearing a deep purple sequin band collar ¾ coat over a shimmery apple red sheath dress with black tights.

Purple, in many hues, has been a bold color of choice for many designers over the past few seasons. It’s been a statement color for a range of accessories including statement necklaces, footwear, and incorporated in a multiplicity of prints. Vivienne infused contrast throughout the collection. The alternative to red was deep teal and the contrast of black and nude with sheer overlay. One model stood in an all black silk dress with a stiff bust full of interlocking satin swirls, another in a black fraile cocktail dress with blossoming silk flowers layered over a nude slip. The message was clear that deep purple and bold reds can be combined in pattern and paired as separates. Standouts this season for the designer were the high-waited pencil skirt, petal-silk blouse, purple fur trimmed red quilted knee length coat and raised interlocking swirl patterns on dresses.

The Vivienne Tam woman is unapologetic for her choices in fashion and sustains a level of control as it pertains to individuality. Each piece communicated distinctiveness, structure and in totality a forward thinking woman. 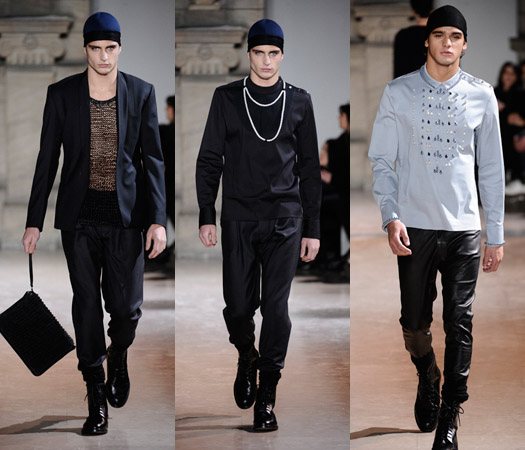