NEW YORK, Sep 11, 2009 / FW/ — Energy was high at the Monarchy Collection show in Bryant Park on Friday. Eric Kim took us into a world of sensual fashion with organic fabrics and simple fabrics.

Tons of linens walked the runway, creating a refreshing tone while incorporating a sexy appeal. Big curled hair flowed from the all American girls.

As they walked by, images of Farrah Fawcett and Kate Moss flew through my head, wondering if they had some part in the designer’s inspiration. The men were clean cut with a slight edge as they rocked the subtle pinstripes and neutral cashmere. Plaid, white, linen, and super fine trousers made for an impeccable men’s collection.

For the ladies, high waisted skinny jeans, crop tops, and floppy jackets revealed women who knew who they were, confident in themselves, pulling off something simply sexy. The boyfriend shirts appeared sporadically on the women, and slim fit shorts made a perfect fit for the men.

Juxtaposition was created with mixing linen and metallics, clashing in a flattering way. This entire line was fabulous. Transitions were flawless. As I walked out, the energy remained high as the crowd discussed their new lust for the upcoming season. 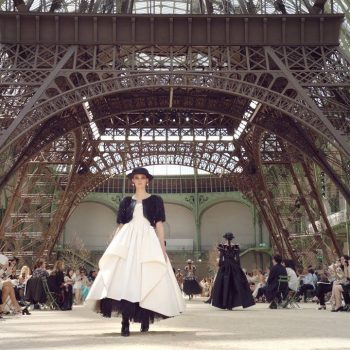