NEW YORK, Sep 14, 2009 / FW/ — It was drizzling and with umbrella in hand, I took a cab downtown to attend the Poleci Spring 2010 presentation and catch up with the brand’s new Creative Director, Jeffrey Chow.

It has been five years since the last time I have spoken with Jeffrey. It was in February 2004, during the debut of his eponymous line at Bryant Park that I first interviewed him.

I remember it like it was yesterday when he introduced ‘power glam’, wherein Jeffrey proposed daywear that is both functional and sophisticated, thus making them perfect for an office setting yet it packed enough glam to be high street.

Following his career for two more seasons, I lost touch with him; hence, when I saw in a press release that he had been appointed as Creative Director of Los Angeles-based Poleci known for its cult celebrity following due to its unique perspective of high street fashion, I knew I had to see it.

So, braving the rain, I was first in line at the Poleci store at Gransevoort Street to see the collection and speak with Jeffrey Chow.

“I remember your face,” was the first thing that Jeffrey said when I introduced myself.

“Thank you,” I replied smiling. “I’m glad you remember because I was there in your first ever runway show.”

The collection was signature Poleci with a generous touch of Jeffrey Chow’s famous power glam. Dresses that drape ever so slightly on the body that makes them look fragile but they hold their structure. Trained at London’s Central Saint Martin’s, Chow is a masterful tailor who can make fabric do exactly how he imagines them to be.

Reinventing the trench coat, he gave it ¾ sleeves and cinched it at the elbow, giving it a feminine touch. Cutting it short, it can also be a coat dress and thus giving the Poleci customer more choices with her wardrobe, which is actually what this collection wanted to achieve.

Youthful, fashion forward and sophisticated California glam, Jeffrey Chow’s debut collection for Poleci is as beautiful as one could imagine it would be. Just ask Kelly Rowland who did not just drop by, but actually stayed for an hour checking out the clothes! 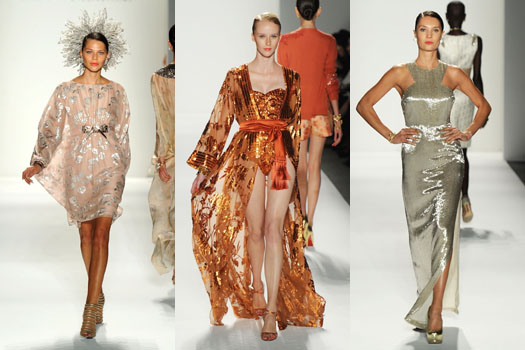