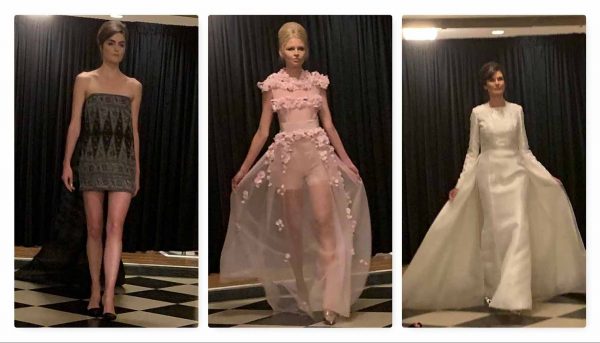 Location… Location… Location… To celebrate the 30th anniversary of his maison, Zang Toi chose the historic 3 West Club at West 51st Street in Manhattan. The tall windows of its Grand Salon overlook St. Patrick’s Cathedral and Rockefeller Center, thus evoking the grandeur of New York City before the glass skyscrapers took over the city.

Inside, the crystal chandeliers, the big mirrors and the gold wood Chiavari chairs created an almost mystical fashion atmosphere reminiscent of golden age of haute couture when fashion shows were intimate. 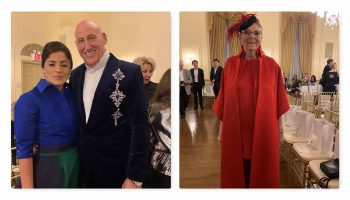 The coup de grace – the guests! They flew in from Washington D.C., Boston, Dallas, Seattle, just to name a few cities. Some of them even traveled as far away as Malaysia, braving the almost 24-hour travel time, just to see their favorite designer. And they were wearing creations by Zang Toi!

Since their outfits were from different seasons, it almost felt like a fashion show of vintage Zang Toi gowns and dresses. Since his creations are timeless, everyone was on point and on trend!

The atmosphere was festive and anticipatory. In the show notes, Zang Toi wrote, “The House of Toi 30th Anniversary Collection is a tribute to my beloved country. The collection includes my interpretation of the traditional Malaysian textiles such as batik, sarong and songket malayu. The pretty pastel palette was inspired by Her Royal Highness Tengku Anis’ love for all shades of pastel.”

So, when the show opened with a black/white batik print gazar cloud strapless back-wrapped mini dress with a majestic train, it was almost expected; the operative word being “almost.” The reason – because the look is so modern and of-the-moment, it just takes your breath away. 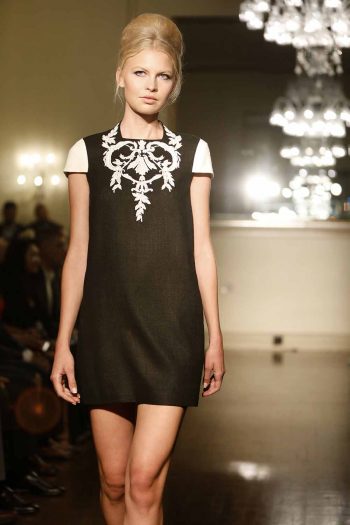 Zang Toi took elements from the traditional Malaysian costume and incorporated them into a modern silhouette. Yes, you can see the Malaysian influence, but it is also an original creation!

To explain this, think of Yves Saint Laurent when he created the “peasant look” way back in the 1960s. Based on the Russian peasant costumes, the clothes which were actually shown during Paris Haute Couture were not costumy… they were elegant. Fifty years later, the peasant look has become a fashion staple.

Zang Toi did something very similar with the traditional Malaysian costume, breaking new ground as he reinterpreted the sarong, the baju melayu and even the sari to fit today’s fashion. Aptly titled “Home Sweet Home,” the collection also highlighted Malaysia’s very diverse culture.

And as all of House of Toi followers know, Zang is a holistic designer, meaning that the runway show is not just about the clothes. It is about the total look – hair, makeup and nails.

Case in point, the chic beehive hair style seen on the catwalk was inspired by photographs of Zang’s beautiful mother from the 1960s.

Roy Naccour, a talented hairstylist from J. Joseph Salon, using a newly minted hairspray from REDKEN reinterpreted that famed bouffant hair for the millennials and Gen X by giving it a soft silhouette with wisps of hair falling freely for a romantic feel.

For the makeup, UBATI New York’s lead makeup artist Rudy Miles from BeautyByRudy did a twist on the very popular cat eye to complement the hair style and as a foil to the elegance of the collection.

Going for a subtle but impactful look, Rudy gave the cat eye a very elongated, more linear and not too pointy shape. The result – sculpted dark eyes that stand out on beautiful matte skin with bronzer as contour. Finishing off with nude lips, the look is very wearable yet also dramatic enough for the catwalk. 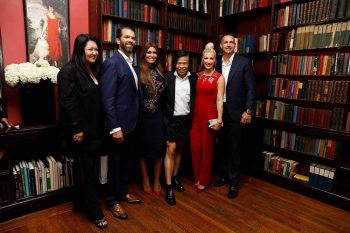 With everything coordinated – from the clothes to the hair, makeup all the way to the elegant French manicure by Marcello Costa’s beauty team, all of the 31 exits in the collection was lovely.

And it is not just me saying it. The clients sitting front row were already making notes on the run of show which ones they like.

So, it was not surprising that when Zang Toi came out to take his bow, he was greeted with a standing ovation and confetti! Donald Trump Jr. who was sitting front row congratulated Zang with the traditional man hug. After the show, guests went up to the 11th floor for the after party which lasted almost till midnight. 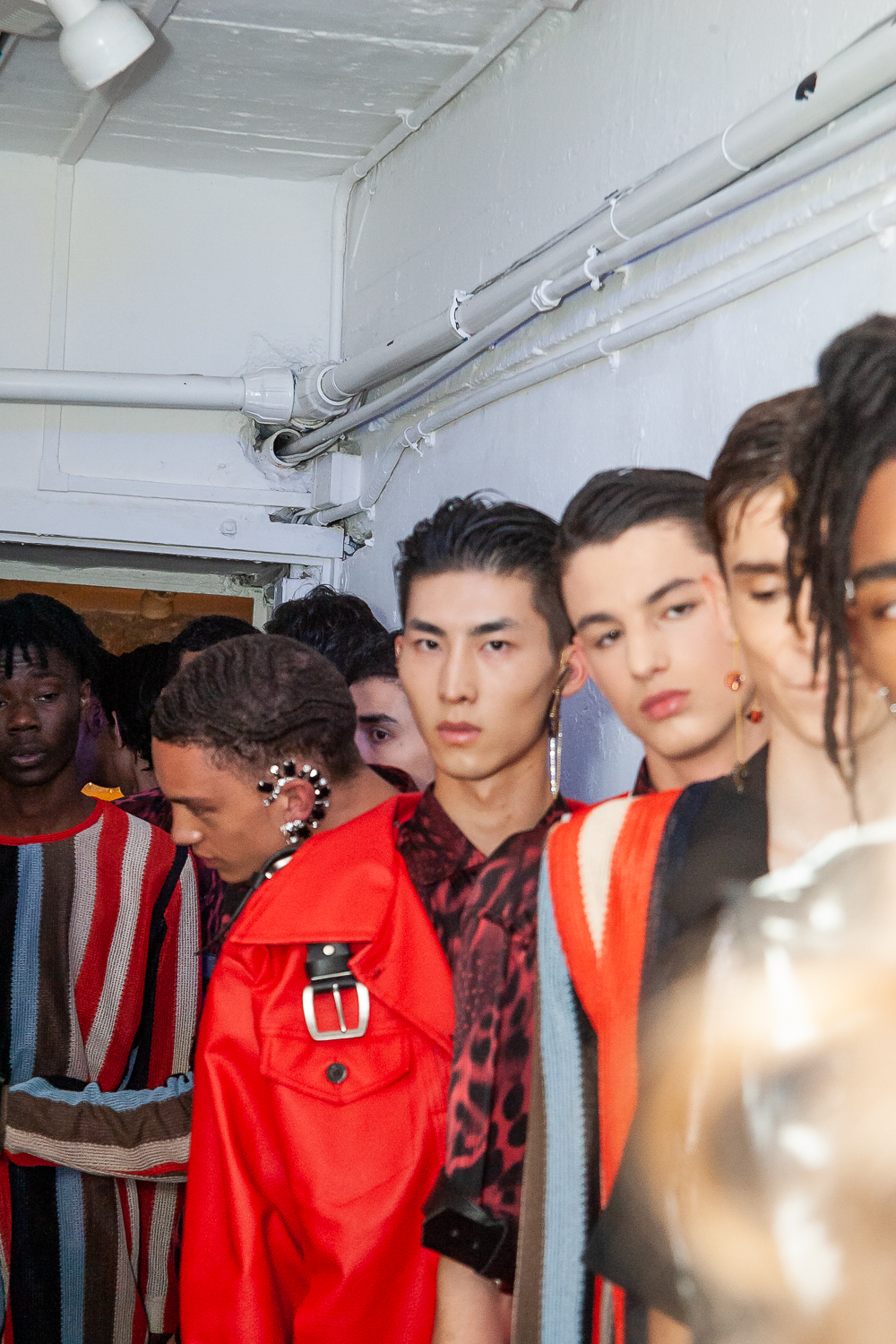 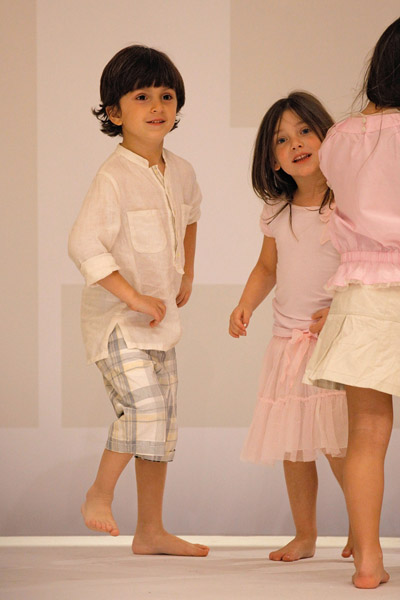