PARIS, Jun 28, 2007/ FW/ — On the first day of Paris menswear, Juun.J, a Korean designer’s house passed with a brilliant show, the exam presentation of his collection in the City of Lights.

Korea is not famous for ‘The’ creativity of its designers. Although Paris is used now to seeing regularly runway shows by Lie Sang Bong during the ready-to-wear week for womenswear, it seems that South Korea still has a reputation of not being innovative enough in matters of fashion design to be able to access the international scene of designers.

Juun.J might just prove all these preconceptions wrong after the work we discovered this afternoon. The backbone of his work this season is based on a research around the trench-coat. What a good idea for a first runway show in Paris to play with this piece of the male wardrobe, which could not be more Parisian!

From the first sleeveless trench-coat in camel to the trench-coat bottom only worn as a skirt just cinched by its belt over pants, to the trousers and trench top combi, creativity and classic finishings are in: perfect visible double seams in the tradition of French tailoring, trench coat buckles and metal pieces covered in leather adorn the reinterpreted volumes by Juun.J.

Splendidly comfortable materials are also interpreted in ample white shirts with double cuffs worn open to prolong the arms in a casual attitude. Some shirtsleeves are even underlined on their entire length with a ribbon of matching colour but contrasting fabric with buttons to create a new split that can reveal a fuller length of their wearer’s arms.

Splendid knitwear, – for instance striped with a white induction on a white see-through knitted piece-, also all displayed a different elaborate type of knitted work on the sleeves of the same pieces.

Juun. J likes to play and make you believe that you are seeing a guy who wrapped a cardigan over his trousers when it is a kind of half skirt with the front open tied with a an inlaid belt of the same material around the waist over the pants.

Pants are always very much tied to the ankles, sometimes full length, sometimes shorter and turned up. They are worn with splendid boots that cleverly mix the traditional finishing of city shoes for men with the soles modern sneakers to create a contemporary refinement.

Although some organza additions could have been avoided, being slightly too much of a joke for a serious runway show, I must proclaim that the discovery of Juun.J on a Paris runway was the unexpected plesant surprise of the day, and probably of the season.

Juun.J seems to be constantly wondering around each feature in the garment he is creating. Sleeves? What if we say “No” ? What could we do with a sleeveless trench-coat ? What if we say “Yes”? Do we really have to put the arms in them or could we use them to create a cape effect ?…

The Korean designer, who has graduated from Esmod Seoul in 1992, certainly knows his craft, which he learnt as a designer at Chiffons and then perfected as a Creative Director for Club Monaco and NIX. Juun.J has then launched his brand called Lone Costume in 1999.

Famous in Korea for creating new silhouettes especially when laying different garments one over the other or when transforming classic items to mix them with streetwear styles, Juun.J was clearly welcomed by the Paris fashion crowds today and his fame will undoubtedly grow from this brilliant presentation which could well represent only a start on the international scene for the Korean designer. Not only does Juun.J understand his craft, he is constantly questioning it, and giving his own generous, witty and elegant proposals for a design answer. 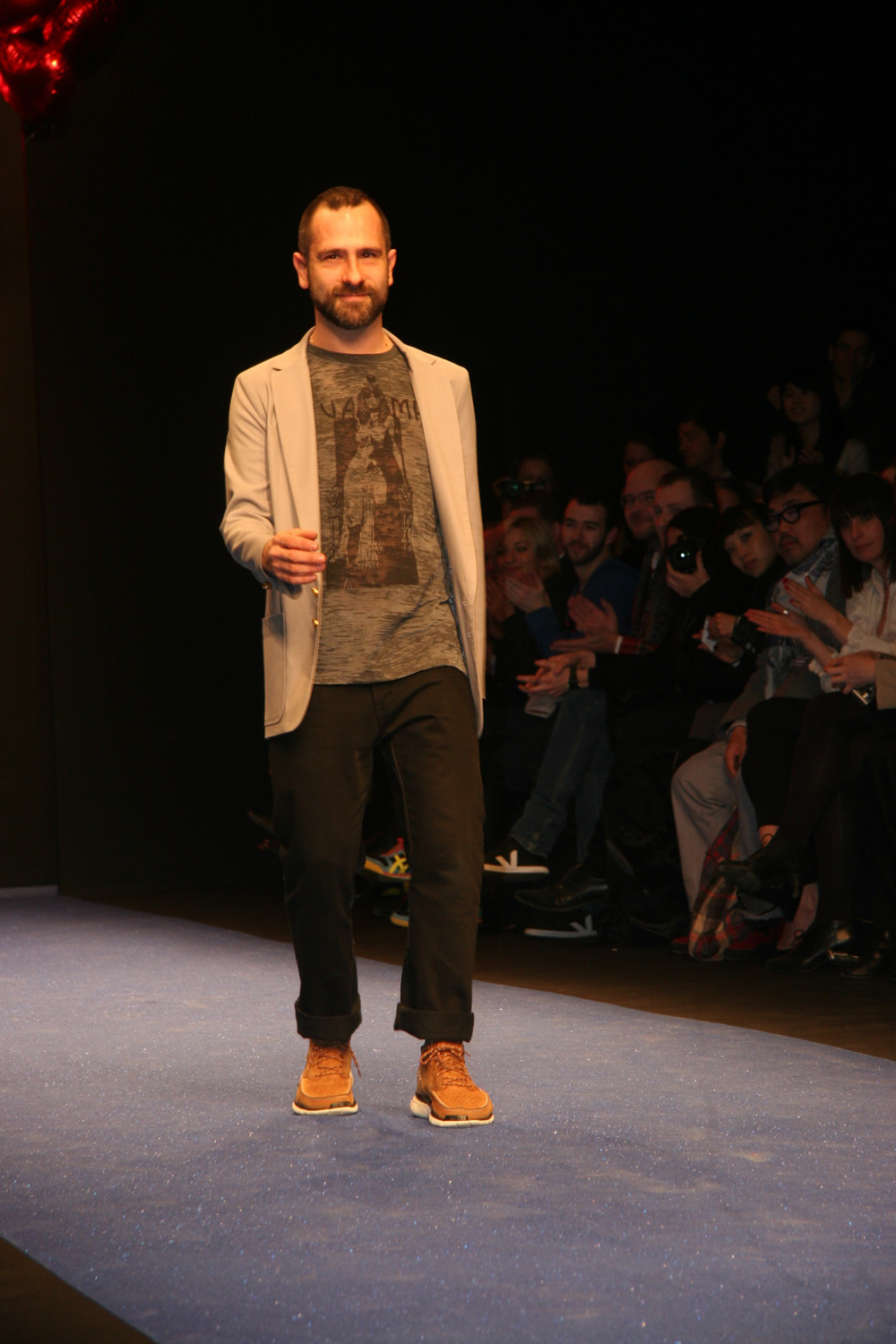