MILAN, Jun 26, 2008 / FW/ — If you’re like me and have been waiting for the new menswear silhouette, head over to Marni’s because Consuelo Castiglioni just proposed new forms and shapes that are more than just promising. In fact, they have a chance to become the ‘New Look’ for men.

Alternating between slim and voluminous shapes, Marni also combined short and long. Thus, there were jackets that were cut longer than standard, while some shirts were cut shorter. Even the sleeves received a makeover, making ‘short sleeves’ actually reach the elbow or just below it.

Still, the most eye catching is how Marni was able to integrate all shapes and sizes from slim to wide without losing coherence. This move shows true artistry and vision. While others are making Spring 2009 a pajama party or make men wear femme inspired clothing, Marni is ahead of the game as the maison proposes true revolutionary silhouettes for men.

Did we just witness a show that will be on the pages of fashion history? I hope so because among the collections this season, this one is the most modern without the trappings of any decades in the 20th century, without the ‘femme’ touches that everyone is so fond of this season. The silhouette is relaxed, but there was no trace of any pajama.

In short, the collection is truly groundbreaking and came from the imagination of the artist who also happen to be a fashion designer. 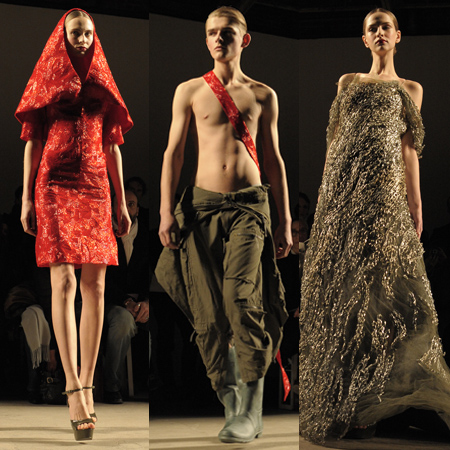