And Charo Peres, who showed bridal gowns and evening wear, will be listed as among the 18 designers who showed during this cusp year.

Keeping the atmosphere romantic, Charo Peres chose upswept hair that is reminiscent of 1960s hairdo but then added glitter via crystals and metallic fabric, and thus making the collection romantic futuristic. And, with Star Trek so hot right now, it won’t be surprising if an avid Trekkie decides to have one made-to-order!

And this is being said with statistics to back it up. Spain has one of the leading wedding fashion markets in the world. Its industrial fabric is made up of 682 companies, whose turnover in the year 2008 came to 1,358 million euros, according to EXPOTECNIC and the Wedding Fashion Manufacturers and Importers Association (ANPE).

The sector has made considerable progress over the last five years, based on growth of 25.8% in terms of the creation of new companies and 13% in terms of business turnover. This favorable development reflects the strong positioning that this sector enjoys today, having established itself as one of the most important within the textile and clothes manufacturing industry in Spain. 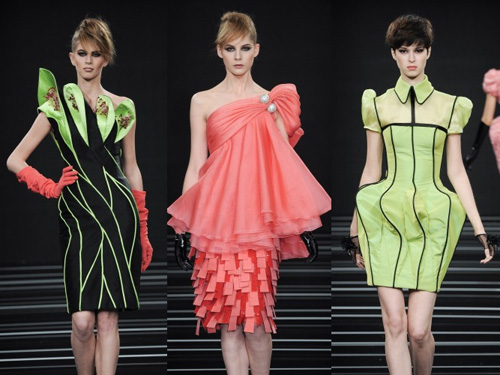