DALLAS, Apr 27, 2009 / FW/ — This fashion season is reflecting America’s infatuation with optimistic science fiction that is full of strong love and mystery. Perhaps it’s because this summer’s expected biggest movies belong to that genre – Star Trek and Wolverine.

The looks for fall are harsh and exaggerated with features of juxtaposition: fortitude contrasted with femininity. Strong shoulders, harsh geometric lines, cut outs, and metallic dominate the runway.

Designers exude strength and valor in women—almost to the point of exaggeration. So are these designers trying to make a point with their walking hyperbolic images? I would think it to be ironic that fashion is reflecting the obvious shift in societal gender roles and women’s power struggle to be independent.

Is this a prophecy of what is to come in our current century? Or is it just simply a way to rave about our obsession with futuristic love stories? It may well be a combination of both, but with the rise of Twilight and Star Trek, I beg to believe the latter assumption. 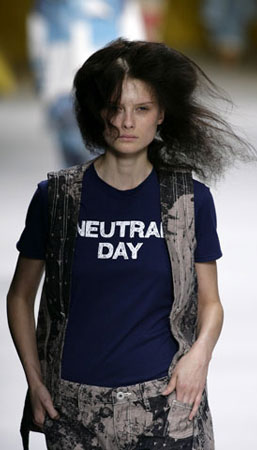