LOS ANGELES, Jul 20, 2008 / FW/ — In the beginning, there was CNN’s Style with Elsa Klensch, which ran from 1980 to 2001. Everyone thought it was the end of fashion on television. Little did everyone know that it was just the tip of the iceberg.

Enter Patricia Field and the famous quartet girlfriends of ‘Sex & The City.’ In the show, fashion became the ‘fifth girlfriend’, which in turn makes it the fifth leading character. How many trends did the show start? Beginning with the obvious necklace with the ‘Carrie’ pendant, namesake necklaces became en vogue. Or, Manolo Blahnik; yes, high street fashionistas already know about him for a long time, but he became a household world, thanks to Sarah Jessica Parker’s Carrie Bradshaw whose collection of shoes was enough to make a down payment for a loft in New York!

As the series ended, new shows are trying to replace it. Surprisingly enough, CW’s ‘Gossip Girl’ that caters to teens and young women has become more popular than ‘Lipstick Jungle’, another Candace Bushnell vehicle, the writer of ‘Sex & The City.’

According to an article by the International Herald Tribune,  “Merchants, designers and trend consultants say that “Gossip Girl,” which is in summer reruns on the CW Network before returning Sept. 1, just in time for back-to-school shopping, is one of the biggest influences on how young women spend.”

And CW’s website is part of the brand spiraling wherein surfers can point and click on the clothes and accessories they want and voila, they can buy it online. According to the same IHT article, CW actually charges fashion companies if they want placement in the series. Though this not unheard of, i.e., paying for placement, usually, ‘borrowing an accessory or an outfit for a show’ is a privilege and fashion houses do not pay for the obvious advertisement it gains.

Still, the blatant ‘selling’ is not just happening at ‘Gossip Girl.’ It’s counterpart, ‘Lipstick Jungle,’ which caters to the thirty-something women and older actually has station breaks wherein Candace Bushnell discusses fashion and how each of the star was dressed and/or made up.

Maybe, this is alright. Perhaps, even the majority might think it is cool. But, on the other hand, it is time to ask, are we having too much of a good thing? Is ‘fashion’ becoming so ‘overexposed’?

Carrie Bradshaw and company became ‘THE fashion quartet’ because of the subtlety of the importance of fashion in the show. Once it became the focus, as in ‘Gossip Girl’ and ‘Lipstick Jungle’ fashion becomes old news and a backlash can be in the offing. 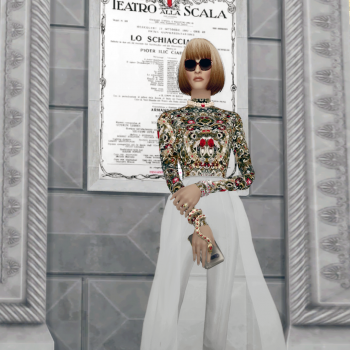