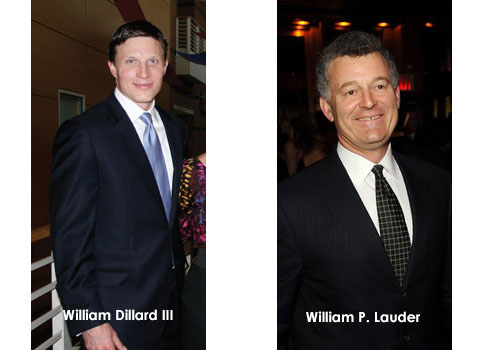 NEW YORK, Mar 5, 2012/ — It promises to be a night for two Bills, as the Fashion Institute of Technology (FIT) honors William P. Lauder, executive chairman, The Estée Lauder Companies Inc., and William T. Dillard III, vice president, Dillard’s, Inc. in recognition of their leadership in the retail industry.

A tradition that started in 1944, the FIT and FIT Foundation Annual Benefit Gala salutes leaders of industry while at the same time, it also acts as a fundraiser for the college benefiting the FIT Educational Development Fund, which provides scholarship, technology, and student services support, among other priorities.

As a special feature of this year’s gala, 28 FIT Packaging Design majors were challenged to design a new package for pleasures, the iconic fragrance from Estée Lauder. A team of judges from Estée Lauder and Dillard’s will select the winner, who will receive a monetary prize, and a selection of the students’ designs will be on display at the gala.

William P. Lauder has served as executive chairman and chairman of the Estée Lauder Companies since July 2009. Prior to that, he was chief executive officer for five years, during which time he expanded the company’s international presence and distribution channels and strengthened the brand portfolio.

Mr. Lauder joined The Estée Lauder Companies Inc. in 1986 as regional marketing director of Clinique U.S.A. in the New York metro area. In 1990, he led the creation of the Origins brand and its innovative store-within-a store concept. He subsequently was promoted to several senior leadership positions, led the worldwide businesses for Clinique and Origins, and oversaw the company’s freestanding stores and internet business. In 2003, he became chief operating officer, with responsibility for the company’s global operations as well as nine specialty brands and the retail business.
Under his leadership, Clinique’s Dramatically Different Moisturizing Lotion became the best-selling prestige skin care product in U.S. department stores, and Clinique launched its first anti-aging product.

As vice president of Dillard’s, Inc., William Dillard III is responsible for accessories, beauty, intimate apparel and home merchandise. Mr. Dillard began his career with the company in its Phoenix regional division office in 1993. He later moved to Hong Kong and joined William E. Connor Associates, a sourcing firm for manufacturing and retail companies, where he gained international experience. Returning to Dillard’s, he worked in sales, buying, area sales management, product development, and merchandising before assuming his present position.

Tickets for the benefit gala range from $1,000 for a Patron ticket to $100,000 as a Platinum benefactor for a table of ten and a full-page platinum ad in the dinner journal. For detailed information on purchasing tickets, contact Vicki Guranowski at 212 217.4105 or victoria_guranowski@fitnyc.edu.