François-Henri Pinault, who is a member of the jury, comments, “It was a truely enriching experience to be part of the 2014 ANDAM Fashion Award jury, and a great time to be in the company of the other jury members.”

“I was surprised by the maturity of the candidates, but also by their fresh perspective. I am very proud to be the mentor of this rich and diverse edition. Fashion needs these initiatives to give a chance to new talents,” Monsieur Pinault added.

Accepting the ANDAM Grand Prize purse of 250,000 euros ($342,000), Iris Van Herpen said, “I am incredibly honored to win the ANDAM Fashion Award. Paris has a special place in my heart as it is the city that welcomed my first creations.”

“The recognition of such an impressive jury is the best encouragement I could get for my upcoming projects especially considering the amount of great talent presented today. All my thanks to the jury, the ANDAM organization and my team,” Miss Van Herpen added.

A 2006 graduate of the Art Institute of Arnhem ArtEZ, Iris Van Herpen started by working for Alexander McQueen in London and went on to present her first collection in 2007 in Amsterdam.

Thanks to her cutting-edge approach to creation, she was integrated into the official calendar of France’s Chambre Syndicale de la Haute Couture in 2011. In March 2013, she launched her first ready-to-wear collection during Paris Fashion Week.

The First Collections Prize of 75,000 euros ($103,000) has been granted to Sébastien Meyer and Arnaud Vaillant, the design duo behind the label Coperni Femme.

“We can’t believe how lucky we are. This is the beginning of something great, of something real. We would like to thank the jury for this great opportunity which will strongly contribute to our brand development,” said Meyer and Vaillant.

Sébastien Meyer and Arnaud Vaillant met in 2009 in their fashion school, Mod’Art International, in Paris where Sébastien is learning fashion design whereas Arnaud studies fashion business.

Their collaboration will enable many rewards, among them the 1st Prize PODIUM Young Stylist 2009 & 1st Prize Mod’Art International 2010. After experiences in France, United States and China, Sébastien decides to create COPERNI FEMME in 2013 with Arnaud’s support who pursues simultaneously his path at Balenciaga. They presented their first capsule collection in September 2013.

Founded in 1989 by Nathalie Dufour, under the initiative of the French ministry of Culture and the DEFI, ANDAM (National Association for the Development of the Fashion Arts) seeks, in the words of its president M. Pierre Bergé, “to identify and support, through its awards, the emerging talents of contemporary designers and assure the role of Paris as a key fashion capital.” 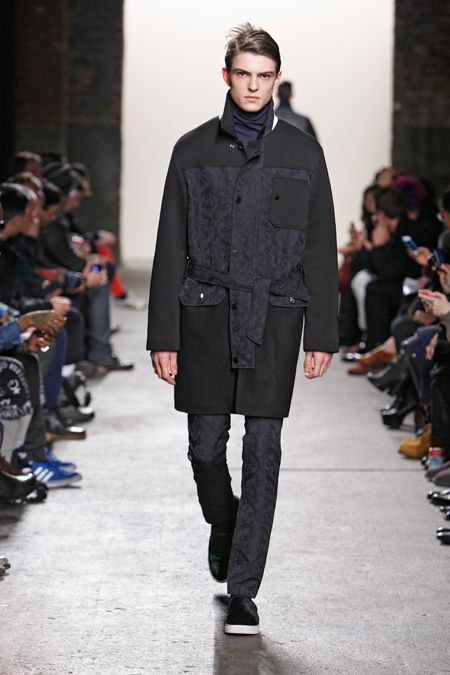