MILAN, Sep 26, 2008 / FW/ — Elevating the functional zipper into a high fashion item, Donatella Versace made hearts and geometric figures, even bigger than life renditions of this fastener as adornments for a very sharp, upbeat collection that respected the Versace DNA without being ostentatious.

Donatella who proclaimed a few seasons ago that clothes would fit the woman and not the other way around had once again used haute couture techniques to create sculpted skirts on hourglass shaped mini dresses.

Her adornment of choice – ZIPPERS! Shaped as hearts, or used as a metallic piping with its teeth showing, the zippers were also used to create geometric shapes designed to be the focal point of the dress.

So, while almost everyone from New York to Milan had given a nod to the transparent and ruffle trend this season, Donatella’s zipper code actually made a strong statement this season, putting Versace once again in the spearhead of edgy fashion.

And though chances are this is not even related, nor it has anything to do with the Versace collection, the zipper dress from YKK seen at Bryant Park in New York is the most popular page this season at FashionWindows.

Whether it’s because zippers are in or it’s just a curiosity, an item’s popularity in another genre (this case as a curiosity) oftentimes spell access in another. 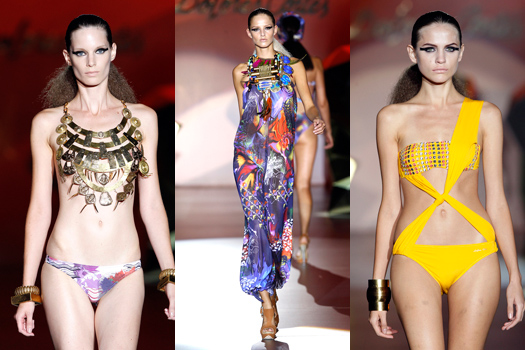