NEW YORK, Feb 15, 2010 / FW/ — Receiving a thunderous applause when he took his bow at the end of the Luca Luca Fall 2010 runway show, Raul Melgoza, the brand’s Creative Director had finally won over the very discerning Luca Luca fans in his camp.

It has been two years since Luca Orlandi bowed out from the fashion house he founded. Raul Melgoza, like any designer who had to take over an iconic label has to please existing clients and get new ones, faced a rocky road ahead when he was named Creative Director. (If you do not agree, just look at Gucci wherein three designers took over Tom Ford and they were all compared to their predecessor.)

And though this is just the second collection that I had seen from Raul Melgoza (I saw the first one and was not invited in the next two shows), from what was shown on the runway, the Fall 2010 collection embodies the Luca Luca DNA with a definitive Raul Melgoza touch.

For those like me who had been following Luca Luca for a long time, we all know how Luca Orlandi defined the Luca Luca woman – edgy, strong and overtly sexy!

Raul Melgoza continued on the sexy and strong but added a little of romance thus softening the edges. This new aesthetics for Luca Luca can easily be seen in the silk silver taffeta trench coat, the silk degradé shantung dress and the silver liquid lamé gown.

And you know what? I like this new Luca Luca woman. 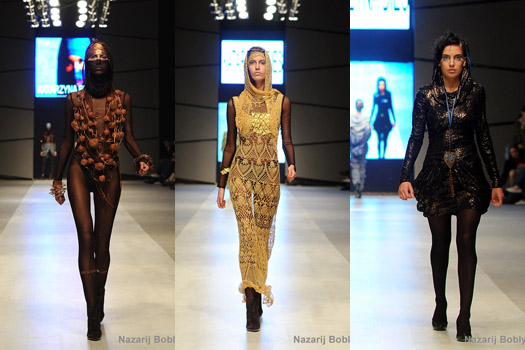